This week's theme at Gothic Arches is Peace...dear to my heart always, and particularly these days, for so many reasons, some personal, some globally political. Thank you for choosing this theme, Heather. Your own arch is wonderful...as I would expect!

I used a beautiful textured background created by Wil over at Art Creations to begin the piece. The I superimposed my own photo, taken when we visited the Canadian National Vimy Memorial just north of Aras in France. Although we thoroughly enjoyed the art and history and architexture in France, the visit to Vimy is my singular most vivid memory of our weeks there. I served decades in the Canadian Air Force, first as a medic, then after university, as a social work officer, and after a tour in Kosovo during the conflict there, I was able to see first hand the ravages and pain of war. My mother served in the Australian Women's Army Corps, and my father served in the Royal Newfoundland Navy during the Second World War. Both my parent's fathers also served, my mother's father in the Dutch Army, and my father's father in the Royal Newfoundland Regiment. My husband was an Air Force aeronautical engineer. My son is enlisting in the Canadian military this summer. We have a strong, and very proud family military history.

So then this photo is of a sculpted statue, part of the Vimy Memorial, and is titled "Canada Bereft." The entire monument, designed by Canadian sculptor and architect Walter Allward, took eleven years to build. This cloaked figure stands at the front, or east side, of the monument overlooking the Douai Plain, and is the largest piece in the monument. She faces east in hope for the dawning of a new day. She represents Canada—a young nation mourning her dead. Below her is a carved tomb, draped in laurel branches and bearing a helmet and sword. She is positioned between the twin towers of the memorial, forever a symbol of our nation's grief at the 3598 soldiers who died at Vimy. Carved on the walls of the monument are the names of 11,285 Canadian soldiers who were killed in France and whose final resting place was then unknown.

I've included other photos as well. This sculpture is so incredibly evocative for me.

I used the background stamp and the torn paper edge to represent the tatters of lives left by war. I've used the title to the song "Where have all the flowers gone..." to represent young lives lost. If you click here,you can see a poignant u-tube video of the song, written by Pete Seger and performed by Joan Baez.
I stamped one of the stamps on this clock cube from Impression Obsession to represent time, which is this week's Saturday Surprise theme.

Thank you so much for visiting today, and for taking the time to read my nattering. It serves us well to reflect on this theme of peace, especially during these troubled times. Thank you again, Heather, for a reflective and peaceful Sunday morning creating this. As always, I incorporated my arch into a card.

I wish you all a day of ordinary miracles. 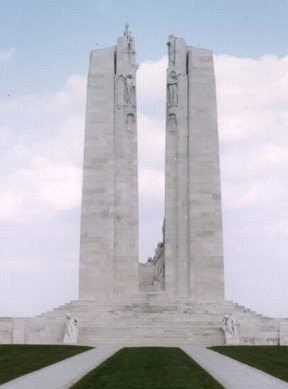 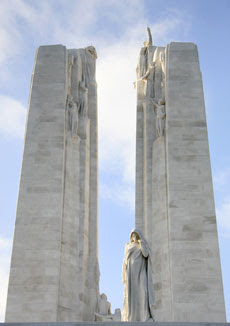 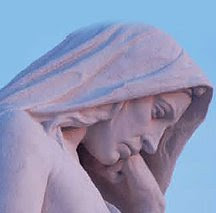 it's fantastic piece Deborah!!!
thanks for sharing the story too!!
I have been at the Vimy memorial too, it's very impressive, I can understand that this means a lot to you considering your story!

What a fantastic piece!!

What a beautiful creation, and thanks so much for the history - quite sad, evocative, beautiful.

Beautiful arch, love all the textural bits and the whole mod of it.

Wow, it's beautiful, such a powerful image.

WOW, amazing arch, Deborah, thanks for sharing the story behind it!
JudyNZ

Love that you have put so much meaning in your arch. I enjoyed your post too.

Beautiful and meaningful! Thank you for sharing this bit of history - it is something I was unfamiliar with. In this era where the word is used a hundred times a day, this memorial depicts the true meaning of "awesome". It is terribly sad that this beauty was created out of such tragedy.

Thanks for your comment on my blog. As for the question why am I basement gal? Thats easy, my craft workshop is in my basement so I'm known as the gal from the basement!
Have a good day.

Gorgeous piece! I love your other work to, its very stylish, clean and elegant!

Hi, Deborah! What a beautiful and moving memorial sculpture. Thanks for sharing it with us.