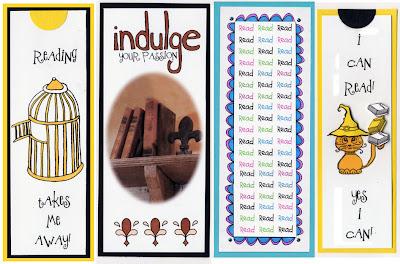 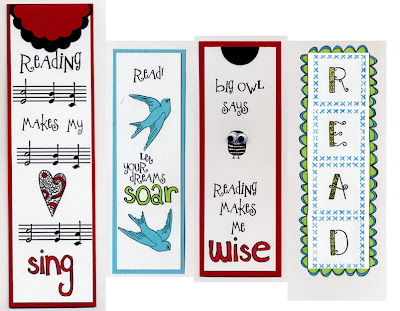 The challenge on Wednesday Stamper this week is to create bookmarks. I've really enjoyed doing these whimsicals for my four grand-boys and two sisters. I needed something fun to take me out of the winter doldrums. All stamps are Just Johanna. For colouring bits and pieces, I used Prismaclour Premier Art Markers. For several of them, I pop-dotted critters and books, although I'm not sure whether you can see that, and added googly eyes to the owl. Third bookmark top row uses a free font called kindergarten.

There's a little story about the "Big Owl says reading makes me wise" bookmark. First of all, this Just Johanna owl stamp's name is "Al." When my daughter was about six years old, I remarried. My husband's father, (whose name was also Al) didn't think he was old enough to be called Grandpa (lol), so he suggested she call him "Big Al." She thought he'd said "Big Owl," because she thought he was so wise, and the name stuck till he died. So THIS bookmark will be going to her, hopefully evoking a nice childhood memory.

Thank you so much for taking the time to stop by.
Posted by Deborah March at 12:10 PM

Hey, I randomly found your blog and got sucked in. I like your posts, please keep blogging! Your bookmarks are very nice, have you considered selling them, or just gifting them?

Oh wow what a lovely bunch of bookmarks. Such beautiful. Love it.

Love all of them

Gorgeous bunch of book marks! Love how many different styles you weave through!
jodi

Lovely and colourful, made with loads of love!

wow you've been busy!! these are all gorgeous.
shame about the spam, it's happening a lot eh....

anyway, beautiful stuff you've made since i last visited!!

these are all so cute!

Fabulous!! They are all great, my favorite is the one with the photo.