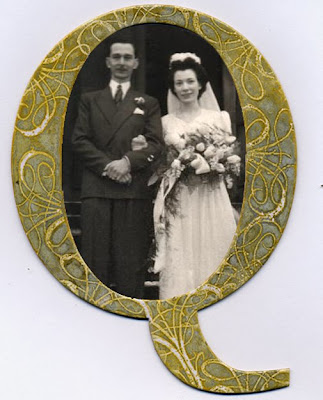 The current Created by Hand challenge is to play with one letter. The current Crazy Amigo challenge is to use colour. I stamped this huge chipboard letter with Quietfire Design flourish stamps, clear embossed it, then oversprayed it with three different colours of Ecoline Watercolour Ink, one which I mixed with a little Winsor & Newton Iridescent Medium. Then I ironed off the clear embossing powder, and used the letter as a frame. The first image shows a friends' parents, the Quins, in their wedding photo on February 11th., 1950, and the second image shows a photo of their daughter Lesley's sailboat, named the "SeaQuin," which docks in and sails out of Victoria British Columbia. The photo I used was originally in colour, but I changed it to sepia in Photoshop, to pick up the colours of the chipboard frame. Lesley has been a friend of mine for thirty-five years, since we suffered (marginally successfully) through basic military training together in 1973. She's also godmother to my son Michael. This was such a FUN project to do, and it's nice to be able to figure out other uses for all those chipboard letters in my stash! 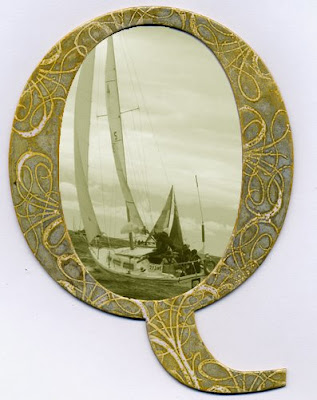 Posted by Deborah March at 4:28 AM

what a great idea!! fantastic!!

What a wonderful Q !

wow this is fabulous!
great idea.

this is such a lovely family portrait.
love the frame

So elegant and beautiful. I LOVE that "Q".

What very clever use of those Q's! Sounds fairly labor intensive, but the end result is worth it! Beautiful.

What a fabulous use of the letter Q - very original, and very special too.
Ros

This is drop-dead gorgeous Deborah! simply stunning! Thanks so much for taking the challenge - see? it wasn't so bad! lol!

Wow so beautiful. Love how you made the letter into a frame. Great take on the challenge.

Deborah, this is so gorgeous. Love the way you used the Q.

Fantastic idea and very beautiful too!

Gorgeous and a great idea.

Wow, this is so cool! Love the idea.